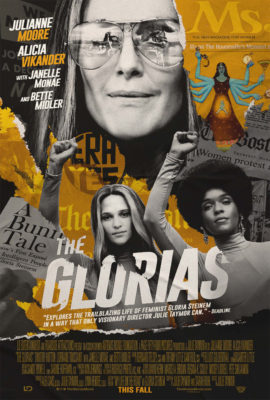 Gloria Steinem– you love her, you hate her but you are likely to know her name. The activist who is known for her work in advocating women’s rights and beyond, and starting Ms. Magazine, is the topic of this biopic called “The Glorias” based on Steinem’s book called “My Life on the Road”, and this film, directed by Julie Taymor and Sarah Ruhl, takes you on quite the trip… sometimes it is more like an acid trip… but a trip down memory lane to be sure.

So, the thing about this film is that it jumps … It jumps between time periods, between different Glorias… well, the same Gloria, but at different age ranges. Each has its own angst and issues with which it finds itself battling. And, sometimes, they talk to each other… in black and white…

And then, there are those acid trip moments when a seemingly normal interaction is happening and then reality falls away and takes us into some rabbit hole we are not sure we will escape. A conversation between Gloria and a chauvinistic interviewer becomes a whirlwind of Glorias and images of a demonic looking wrapped up nun, an enticing Playboy bunny version of Gloria, the other Glorias too… They all watch as the man spins into the air trapped in a tornado out of the Wizard of Oz, complete with a witch on a broom… If that isn’t trippy enough… What about the cover of Ms. Magazine’s first issue’s Hindu Kali God coming to life in full animation or a younger Gloria suddenly having a man throw knives at her in a circus type atmosphere. These are just a few of the wild asides this film takes you on. It certainly keeps you awake.

It is a fragmented watch for sure. It is as if Gloria wrote about her life on sheets of loose leaf paper, threw it in to the air and someone just showed whichever piece of her life they picked up first, second and so on. Sometimes, it goes back and forth at a good pace; other times you wonder if it will ever return to another Gloria.

But although the format seems a bit unorthodox, it does not mean there are not some gems in there. The story of Gloria at every age is intriguing from her mentally ill neurotic mother to her doting dad, who struggles in his career, to her fellowship to India, to having an abortion, to her start in the women’s movement and beyond. Interestingly, this film’s venture into the women’s movement and fight for the ERA parallels the story told in “Ms. America”, a limited series on Hulu, except that story is told from Phyllis Schlafly’s POV, who was against the ERA and many things Steinem was for.

There are certainly plenty of high end actors in this film to watch, including Julianna Moore as the more mature of the Glorias. She fits the character to a tee and Alicia Vikander, who plays a younger version, works hard to try on the character. The other two Glorias are played by Ryan Kiera Armstrong and Lulu Wilson. Bette Midler plays US Representative and headstrong and sassy activist Bella Abzug. Timothy Hutton is great as the dad. Also look for wonderful performances from the likes of Janelle Monáe as Dorothy Pitman Hughes, Lorraine Toussaint as Flo Kennedy and Monica Sanchez as Dolores Huerta, among others. The various women’s roles such as these were much better served in “Ms. America” then in this film where they are relegated to secondary roles to Steinem, much like her face on the cover of Newsweek (talked about in the film)–much to her chagrin. Then again, this movie is about her and not just about the movement.

This movie should really appeal most to women who will find the stories touching and poignant, and applicable to their own lives in one way or another, and also will serve as inspiration.

It also showcases many of the issues that have plagued women through the years and how things have changed, and not changed since then. Gloria is shown to be not taken seriously as a journalist, propositioned by a boss, harassed for not being married; called a Lesbian, a sex symbol, a feminist and other labels. It shows the stigma of abortion, its dangers and the fight for pro-choice, how women’s voices were not heard. It talks about women of all races and their issues as well. It also points out that the ERA was never passed. These are just a few of the many points covered. This film is a great conversation piece to explore these issues further, perhaps between mother and daughter.

“The Glorias” is now available on Amazon Prime. For more info., visit https://www.thegloriasmovie.com/