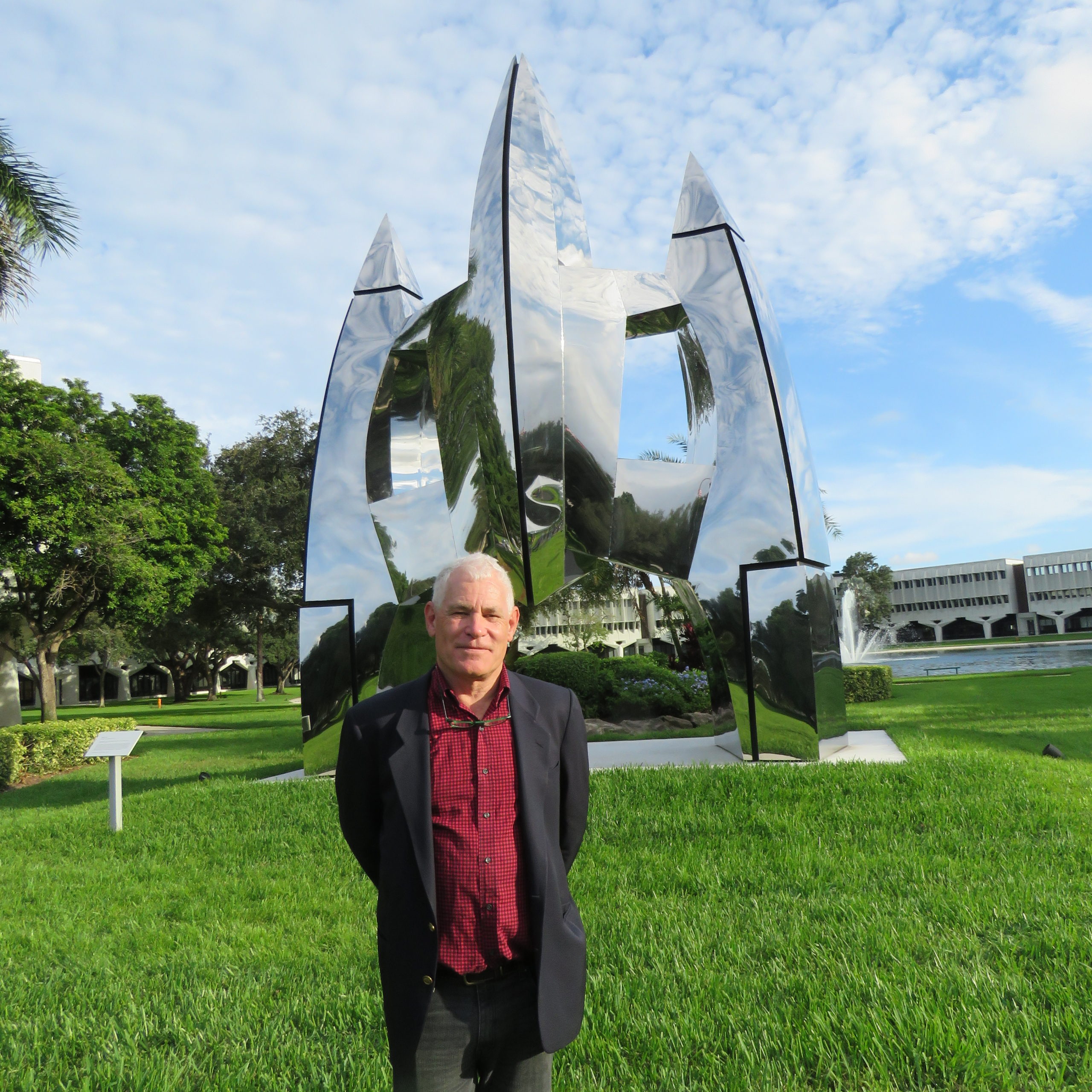 Photo: Artist Hubert Phipps at the unveiling of his “Rocket” sculpture at the Boca Raton Innovation Campus (BRiC) on September 20.

A seeming conduit to the divine, a 30-foot stainless steel towering form juts toward the heavens, with its feet firmly planted on terra firma, among the green grass at the Boca Raton Innovation Campus (BRiC). What began as abstract art took form as a rocket and that is its name – “Rocket.” It is the creation of artist Hubert Phipps, who arrived for its “unveiling” on September 20.

The project began four years ago and only as a sketch, said Philpps, whose process is not one of building something in the normal way, nor eliminating everything that is not what he is trying to create, but of sensory deprivation. He is known to put himself into darkness, limiting outside sound and sight and letting his hand as he sketches reveal what lies beneath. His 2-D work is revelatory. His paint pigment on paper shows movement, life, light among the darkness. His sculptures are just as organic, as he creates natural forms that look like they will animate and slink away any moment. His “Rocket” has the same dynamism. Although it looks firmly planted, it appears as if it could blast off at any time, careening into the atmosphere to explore regions beyond, to see what cannot be seen.

Exploration is really all about curiosity and wondering, “What if?” Speculation such as this has led to some of the greatest breakthroughs in our history, including the computer. It is apropos that a sculpture that symbolizes, in part, that quest for knowledge be planted at BriC, where the IBM personal computer was first invented.

What is perhaps more interesting is that when the art was first created, first by a sketch back in 2018 and then in 3D as smaller sculptures, Phipps had no idea that one day a larger version would be placed here. Its placement came about after he met Irvin Lippman, the executive director of the Boca Raton Museum of Art, who saw Phipps’ show including maquettes of the “Rocket” at the Coral Springs Museum of Art. At that time, he told Phipps about a new Art in Public Places initiative, part of a cultural partnership between the Boca Raton Museum of Art and CP group, who owns BRiC and is a premier developer and operator of commercial real estate. This was the beginning of Rocket coming to this space. What is amazing is that the statue’s form almost perfectly mimics the building behind it, which was created by architect Marcel Breuer in the 1960s. They both employ the Brutalist style. Lippman said, “The museum is happy to be a matchmaker here,” as he explained how he first met Phipps and told him about the program. “It is a match made in heaven.”

Creating the 9.8-ton sculpture composed of 2,200 square feet of stainless steel was not so simple. It was made in three pieces over in China and then shipped to the U.S. What baffles Phipps is that it was not sent directly to Florida, but actually went to multiple locations on ship and then by truck before finally arriving here. Then, he said, engineering came into play to put it all together.

Phipps did not begin his journey into art in the abstract realm. His father was a publisher and Phipps fell in love with illustrating political cartoons, the exquisite detail of it. So he has seen what it is to create more realistic forms and what it is to delve into abstract art, and he can say that both are equally challenging. With realism, he said, there is an endpoint, a goal, you know what it will become. With abstract, in contrast, the artwork leads you and knowing when to stop is not always so easy.

Sometimes, he says he often does not see a piece of artwork’s importance until later. “I don’t give it any credence or appreciation until later,” he said. “I don’t have a pre-conceived notion [of art I create.] I didn’t sit down to create a rocket.”

At the event celebrating Rocket, he thanked those who helped make it possible, saying, he was honored his sculpture was part of the Art in Public Places initiative,” adding, “Art has been hugely important in my life. I applaud everybody who worked together to bring this to Boca Raton.”

He also talked about his love for aerospace and remembered an experience when he was only 10 years old living with his uncle near Indiantown here in Florida. One night, he heard a rumbling sound outside, a roar, and asked his uncle the next day what it was. His uncle joked that maybe it was cattle stampeding (as the area was filled with mostly cattle and orange groves back then, said Phipps). But, it turned out it was nearby Pratt & Whitney testing rocket engines. He also recalled seeing Neil Armstrong set foot on the moon. That was 1969, the same year the building behind where Rocket now is placed was built.

“I love the forms of rockets, things to do with aerospace,” he said, “I have a lifelong passion with aviation. I’m a pilot. I’m fortunate enough to have been flying for almost 50 years. I still fly.” His family was comprised of early Palm Beach pioneers with a history in aviation. One of his ancestors, Amy Phipps Guest, was one of the first women aviators. She had hopes of being the first woman to fly across the Atlantic Ocean, but her family was too protective and asked that Amelia Earhart be chosen instead, and Earhart did make that first flight in 1928. Guest continued to be a champion for Earhart and aviation. Her love of flight seems to have been passed on to Phipps.

He added, in reference to his Rocket, “I created this … The inspiration comes from all the amazing things we do as a human race as far as pushing the envelope, as far as reaching the stars, if you will. How timely now with all this going on in the aerospace world today, so this could not have worked out better. Of course, all the synergies that have been mentioned about this form and how it works with the architecture…”

Boca Raton Deputy Mayor Andrea Levine O’Rourke, who was in attendance with other councilmembers, said, “This could not be a better representation of art in public places. You can see yourself in it … It can reflect the past or be a symbol of where we came from and where we are going”

Phipps, who currently lives in Virginia, is planning on being in Palm Beach for a solo exhibition at the TW Fine Art Gallery. The show, which will feature maquettes of his Rocket, opens November 27 and runs for six weeks.

Besides creating art and flying, he also was a professional race car driver, so he has had varied experience, and some of it in what some might consider high-risk situations. But he does not see it that way. He is not a daredevil. To him, being able to make those turns at high speed, fly up in the sky and give birth to a beautiful piece of art that will inspire others is more calculating. It appears to require intense focus, dedication and passion. With everything he does, it seems he really is reaching for the stars … to infinity and beyond.

To find out more about Hubert Phipps, visit www.hubertphipps.com. “Rocket” is located at BRiC, at 5000 T-Rex Ave, Boca Raton.