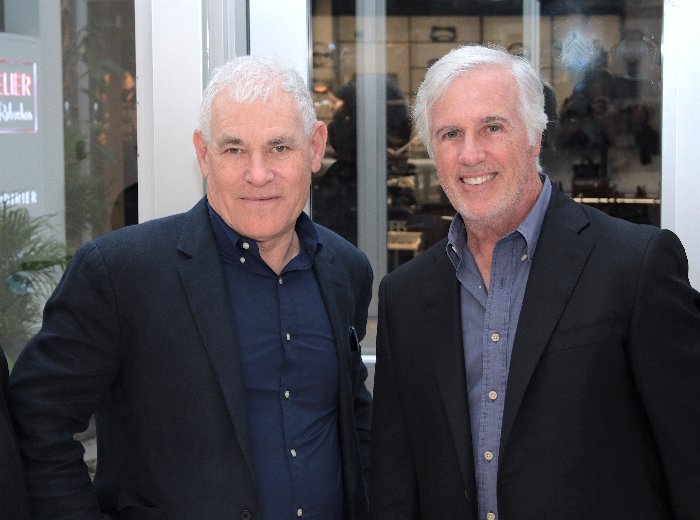 Pictured above: Hubert Phipps and Danny Sullivan at the art exhibition event.

In Honor of the Hubert Phipps Art Exhibition in the Miami Design District, at the ARES Modena Supercar Showroom, The Italian luxury coachbuilder ARES Modena (which specializes in limited series and one-off supercars for select clients) invited legendary motorsports champion Danny Sullivan to a VIP celebration on Feb. 3 in the Miami Design District.

The reception was in honor of the nationally acclaimed artist Hubert Phipps who was one of Sullivan’s professional teammates when Phipps was also a national racecar champion.

The private event celebrated the art exhibition Hubert Phipps: Ascending, which ushered in the arrival of the ARES S1 supercar model for its North American premiere at the new ARES Design Miami showroom (the first ARES showroom in the U.S.).

This reception was presented by the award-winning Italian wine Lambrusco Concerto by Medici Ermete winery (awarded for 13 consecutive years Tre Bicchieri Gambero Rosso, winner of “Best in Show Champion Trophy,” and awarded to the International Wine Challenge 2010 in London).

The paintings and sculptures by Phipps surrounded the supercar model in the showroom, creating a striking effect.

A sculptor and painter, Hubert Phipps is also a pilot, coming up on his 50th anniversary as an aviator in the tradition of the Phipps family. The exhibition featured several works born out of the artist’s love for acceleration and for aerodynamic forms. Watch the premiere video here of the ARES S1 supercar, and watch a video of the event featuring Danny Sullivan and Hubert Phipps here at this link.

“I am honored to have been invited by ARES Miami for this collaboration, and am thrilled that my friend Danny Sullivan was present at this special reception,” said Hubert Phipps. “ARES Modena is one of the world’s leading studios of high-performance design and stellar engineering, and this collaboration is igniting new inspirations in my artmaking,” adds Phipps.

The title of this exhibition – Hubert Phipps: Ascending – reflects the growing national recognition of the artist, and Phipps’ history with racecars and aircraft. The exhibition debuted during the week of Art Basel in Miami.

“Phipps’ background as a champion racecar driver and an aviator is clearly evident in his sleek, captivating artwork. These bold pieces by Phipps created a singular, powerful experience as they encircled our ARES S1 supercar model for its North American debut. The passion that goes into coachbuilding is very similar to producing a sculpture, each is a masterpiece that can be appreciated for its unique shape and design,” adds Dany Bahar, the Co-Founder and CEO of ARES Modena.

From 1979 to 1985, Hubert Phipps turned in solid performances in racecar driving, winning the SCCA Formula Atlantic National championship. He achieved wins in the Formula Atlantic Professional series at Willow Springs in 1984, and again in 1985.
His professional racecar teammates of Hubert Phipps included Danny Sullivan at Garvin Brown Racing in 1982 and Michael Andretti at Ralt America in 1983.

The new ARES S1 supercar model was flown from Italy to Miami, and has never been shown in North America.
The one-of-a-kind, automotive work of art is the centerpiece for this exhibition, surrounded by sculptures and artworks by Phipps that are seen as a perfect fit with the creative aesthetic behind ARES Modena’s singular success in automotive design.

The new ARES S1 supercar model makes its North American premiere alongside this new art exhibition by the American artist Hubert Phipps. Watch the video at youtu.be/5hcJV1HRy6E
Only 24 versions of the ARES S1 supercar will be created in the entire world, each tailor-made to the client’s desires and taste, making each design unique. The ARES S1’s dramatic low-profile is similar to racing prototypes from the 70s and 80s.
Hand-crafted in carbon fiber, the curvaceous wheel arches, with sculptured side skirts and forward sitting cockpit, give a sleek yet aggressive stance.

The S1 is powered by a naturally aspirated V8 delivering power to the wheels via an 8-speed dual clutch transmission. The interior combines the finest Alcantara and Napa leather that is quilted in specific areas.
These sculptures and artworks by Phipps rev up the space in the ARES Miami showroom, apace with the supercar’s electrifying spirit:  Sky Temple, Voyager, Arch, Lava Flow, Africa 1, and Africa 2, plus a maquette-sized version of Rocket from the private collection of real estate magnate Lawrence Moens.

Special guest at this event was the Certified Sommelier Mauro Maugliani (WSET Awarded), an Italian wine specialist for the Southeast USA and Caribbean for Kobrand Corporation. Guests enjoyed the Italian wine Lambrusco Concerto by Medici Ermete winery represented in the U.S. by Kobrand Corporation, one of the leading companies in the US market.

Phipps comes from a history-making family that boasts generations of aviators. He acquired his pilot’s license at the age of 16 and has logged more than 4,000 hours of flying time (he often pilots his Airbus Helicopter H-120 down to Florida from his artist studio in Virginia).
One of the most striking examples of Phipps’ passion for motion and flight is Phipps’ monumental sculpture titled Rocket, which was recently selected for a major Art in Public Places program spearheaded by the Boca Raton Museum of Art.
The 30-foot-tall sculpture is valued at $1.5 million, and is one of the largest outdoor sculptures in the history of public art initiatives in Palm Beach County.

Watch the dazzling aerial video of the Rocket sculpture at youtu.be/U9SzZCauoJM (a maquette-sized version of Rocket will be featured in this exhibition at ARES Miami)

To find out more about Ares Design, visit https://www.miamidesigndistrict.net.