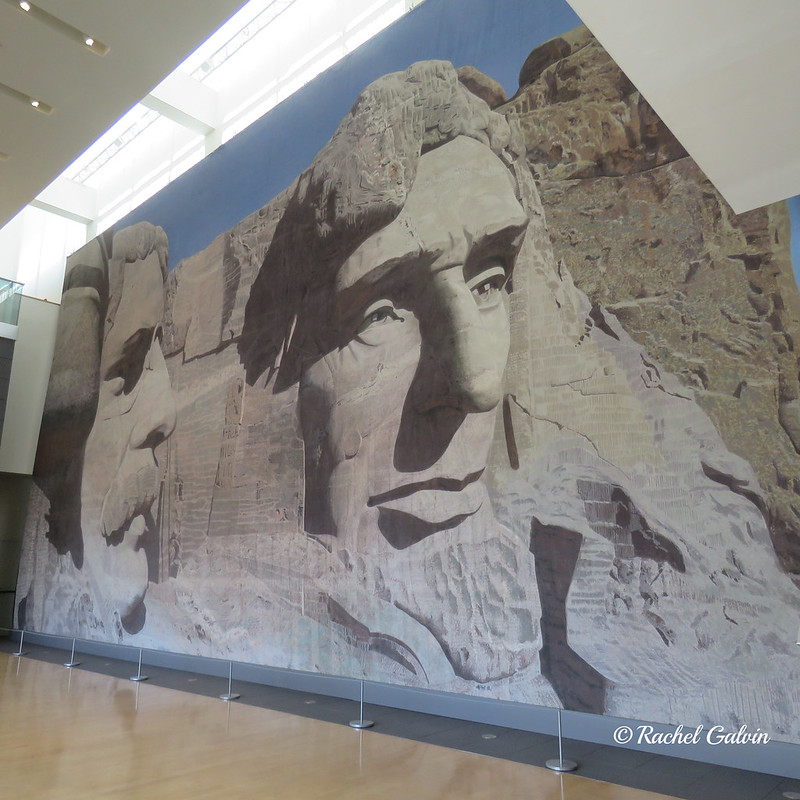 Backdrop is from “North by Northwest.”

These days, the background in movies is often created digitally or using green screen. In the last issue of “Independent Streak Magazine,” that topic was covered with a spotlight toward cutting edge technology that is paving the way toward the future in film (See www.independentstreakmagazine.com for archives). But in the olden days, before the Golden Age of Hollywood and beyond it, backdrops were done differently. They were painstakingly painted in vivid detail, and these early artists were the unsung heroes of the Hollywood blockbusters.

What would a movie like “Wizard of Oz” or “Cleopatra” be without the grandiose backdrop? Yet, these monumental achievements were eventually rolled up like forgotten scrolls to be eventually discarded.

Luckily, 207 of these unique backdrops were saved from being thrown in the trash after Lynne Coakley, the president of JC Backings, one of the largest companies to rent out such backdrops, decided to donate them to the Art Directors Guild instead of tossing them. The guild, under the direction of Art Guild President Thomas Walsh, has been working to preserve these precious items since. One of the recipients of some of the backdrops was the University of Texas Austin.

Now, Karen L. Maness, from the university, and Walsh, have curated a collection of these historic backdrops as part of a new exhibit at the Boca Raton Museum of Art in Boca Raton, Florida. Called “Art of the Hollywood Backdrop,” the exhibit includes information on how the backdrops were used and those who created them. The artists of these backdrops were usually not listed in the credits at the time. Much like the workers who helped craft the greatest pieces of the Renaissance masters, these artisans would be lost to history … until now.

Twenty of the backdrops are courtesy of the Texas Performing Arts Hollywood Backdrop Collection at the University of Texas. The Motion Picture Academy in Los Angeles has also loaned two works: the 1952 backdrop for “Singin’ in the Rain,” made famous by Donald O’Connor’s comic performance of “Make ‘Em Laugh;” and the tapestry backdrop for “Marie Antoinette” (1938), which was reused in “North by Northwest” (1959) in the auction house scene.

There are so many iconic backdrops on display that serve as perfect photo ops. Here, you can see large scale the grandiosity of Rome as seen in movies like “Ben Hur,” the Austrian Alps used in “The Sound of Music,” the majestic Mount Rushmore, which once served as a location in “North by Northwest” and more. The backdrops all are were used from 1938 to 1968.

The exhibit is perfect for the cinefile who specifically loves old cinema, for those who are in the film industry who love to know all there is to know about the industry, or just for those who want to marvel at the undertaking to create such detailed and grand landscapes.

It is interesting to hear via video the in-depth stories of how the backdrops got their start. One such story discusses Alfred Hitchcock’s iconic “North by Northwest.” In 1958, art designer Robert Boyle was told by Hitchcock that he wanted to create a film with the movie having its climactic scene on Mount Rushmore. He did not even know what the story would be about, but he knew he would want that scene. Originally, the working title was “The Man on Lincoln’s Nose.” They tried to actually film on Mount Rushmore, but they were unable to get permission because, with a name like that, the park service was afraid the film would mock the landmark.

So, Boyle had to get creative, literally, and make a backdrop. The process was not easy. They had to do their research. They went up on Mount Rushmore and careened down, taking photos all along the way. When it came to creating the art, they realized the final product would need some tweaking. If it was an exact replica, Teddy Roosevelt would not be visible well, so they had to cheat him out a bit. These are just some of the steps to create the ultimate look used in the film.

This is just one story featured via video, and there are plenty of videos and items to read to get a fuller picture on how these early films were brought to life through backdrops.

When you visit the exhibit, don’t miss the accompanying exhibit upstairs by Bonnie Lautenberg called “Art Meets Hollywood.” She is known for taking photos of people all over the world, from politicians to pop stars, but for this exhibit, she utilizes the art and media of others to create something new. She pairs together stills from historic movies and iconic artworks made in the same year. She seeks out pieces that “speak to each other.” Her exhibit, curated by senior curator Kathleen Goncharov, seems to showcase how different forms of art and culture influence each other. A particularly haunting piece happens to be the first, a pairing of Rene Margritte’s “The Lovers” and “The Mysterious Lady,” starring Greta Garbo, both made in 1928.

Since she includes film stills, the correlation is made between this and the exhibit downstairs. A crossover is also made with Lautenberg showcasing a still from “Singin’ in the Rain” paired with an artwork by Yayoi Kasuma, which corresponds with the backdrop from the famous musical downstairs.