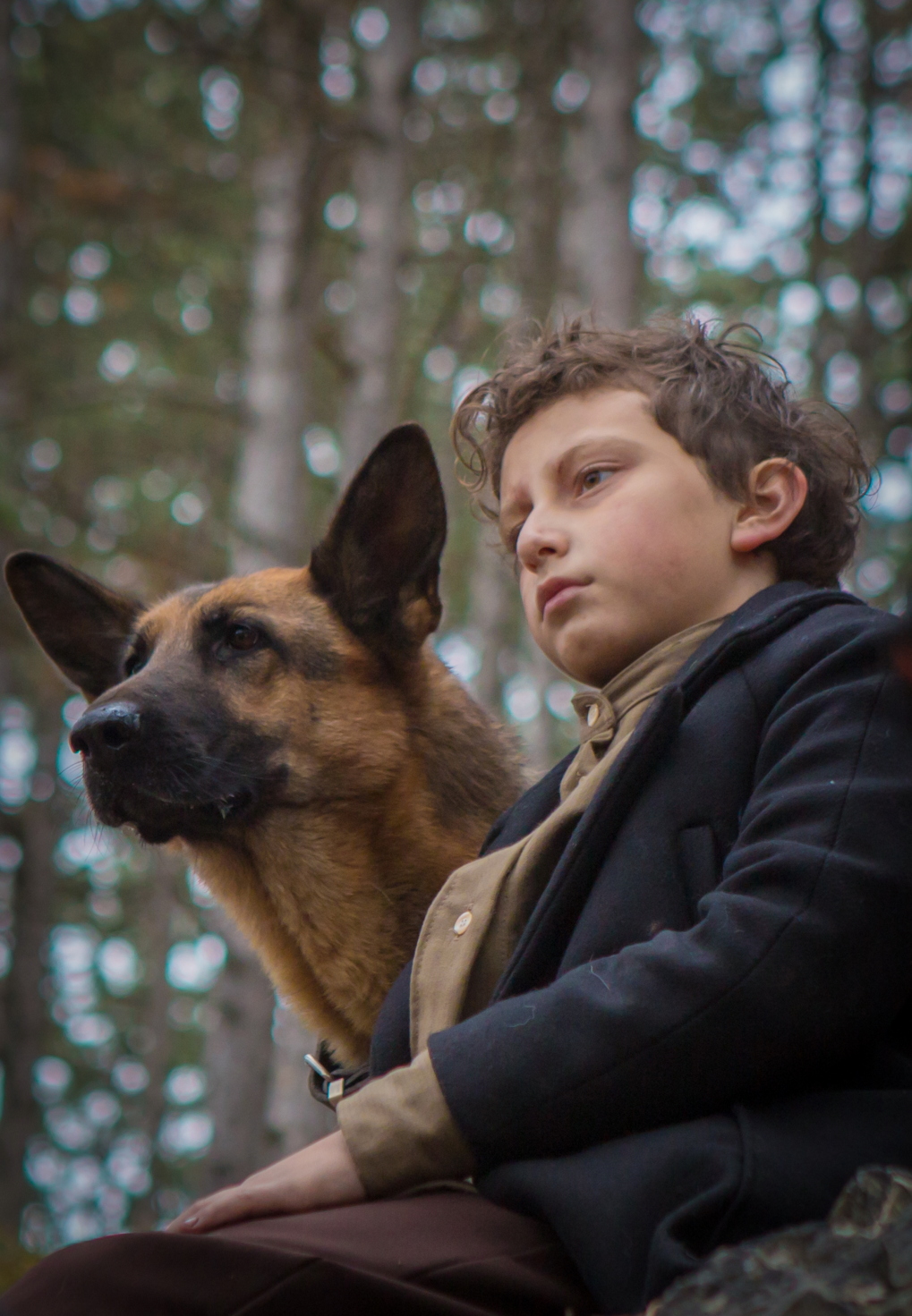 At heart, this is a story about a boy and his dog, but, being that it was set beginning in 1930s Germany and going into World War II, it becomes much more complicated than that.

A Jewish family’s dog has puppies and, one by one, the family begins giving them away because they simply cannot keep them all. In the end, they are left with the mama dog and its baby Kaleb. But as the Nuremberg Laws begin to be put in place to suppress Jewish rights, including saying that Jews cannot own pets, they must decide what to do with the two that are left. The story follows the last dog to leave, Kaleb, the youngest son’s beloved, as he goes on his own journey. Not everyone wants Kaleb and he dreams of the loving household he was forced to leave behind. He realizes his former family has gone away.

Eventually, he becomes the property of an SS officer who shows him love and trains him to be the best dog in the bunch, which leads him to being sent with his new owner to the work camps. There, he is reunited with the youngest son, Jacob, and they have an adventure of their own.

The film was based on a book, which is not a true story, written by Asher Kravitz. It was adapted for film by Lynn Roth, who also directed the film.

Asked how she came across the book, Roth said that the story found her. She explained, “I was teaching a class in Israel, teaching kids how to pitch. A student came in with an idea that his friend was writing but he wanted me to know about it. The idea of a dog during the Shoah was too intriguing to let go.”

Before doing this film, she had made a film that was released in 2007 called “Little Traitor,” which she said was very successful in South Florida. “Still today, it is the longest-running film that Movies of Delray ever had,” she said.

It took her eight years to get the funding together for the film “Shepherd: The Story of a Jewish Dog,” which is a low-budget independent film. They shot the entire film in Hungary and were able to use practical sets for everything, including the work camps, which had been used for movies in the past. She also found probably the most important aspect of the film in Hungary– the dogs and, along with them, the dog trainers, who she said are the go-to people for anyone making a film in Europe. Since she lives in Los Angeles, the only way to check in on the training of the dogs was to do it via Zoom and emailed videos. It took a long time to do the training.

They rotated the dogs, using different ones for different actions … like growling, swimming, attacking, etc. But the main one used was the one used in the close-ups. The dog they wanted her to use did not make enough eye contact, so she chose another.

There is a part near the beginning of the film when the family sees many different types of dogs, and the dogs and their owners look alike! This was a funny moment, and the type of lighthearted feeling she hoped to achieve in that part of the film. “I wanted it to be lighter in the beginning,” she said, hoping to show how the family was interacting with each other before things got really bad. Things were not perfect, but they were able to laugh and have fun with each other, but things progressively got worse. As far as finding dogs that matched up with the people, she said she found those dogs also in Hungary and matched the people to the dogs.

In order to achieve the truism needed for this period piece, Roth had to work long and hard to find the right props, wardrobe, etc. “Every step of the way, we researched very carefully,” she said. In Hungary, again, she said she found “a wonderful wardrobe person,” and was able to find everything else she needed.

They were able to make what she calls “a miracle” film within only a month, and with a great aesthetic, very much like is often seen, she said, in European films.

The little boy in the movie, Jacob, played by August Maturo, becomes the lead actor in the film, along with the dog, Kaleb. Before doing this film, he had built quite the repertoire, including working on a TV series called “Girl Meets World.” While that show was a comedy, this film required intense emotions, something Roth said was not difficult for the young actor, as his emotions were close to the surface. “He feels very deeply,” she said.

Roth mentioned that his mother, Shoshonna, played by popular Israeli actress Ayelet Zurer, is known for shows like “Shtisel,” as well as “Losing Alice” and films like “Man of Steel,” among others.

Asked what she hopes people will come away with after seeing the film, Roth said, “I hope people see … what we can learn from animals. I learn so much from my dog – loyalty, the ability the forgive, their joy… We should study them more. Life would be better.”

She added that there is bad and good in people, but if there was more good, then life would also be better. “There is not enough emphasis on how to be good. It is not so hip to be bad. There is something to be said for bringing out the good in all of us.”

The film will be released in South Florida starting on June 11 at the following theaters: Regal South Beach in Miami, Regal Magnolia Place in Coral Springs, Regal Westfork in Pembroke Pines, Movies at Lake Worth in Lake Worth and Regal Royal Palm Beach in Royal Palm Beach. To see additional theaters nationwide and internationally, and to see more information, visit www.shepherdjewishdogmovie.com