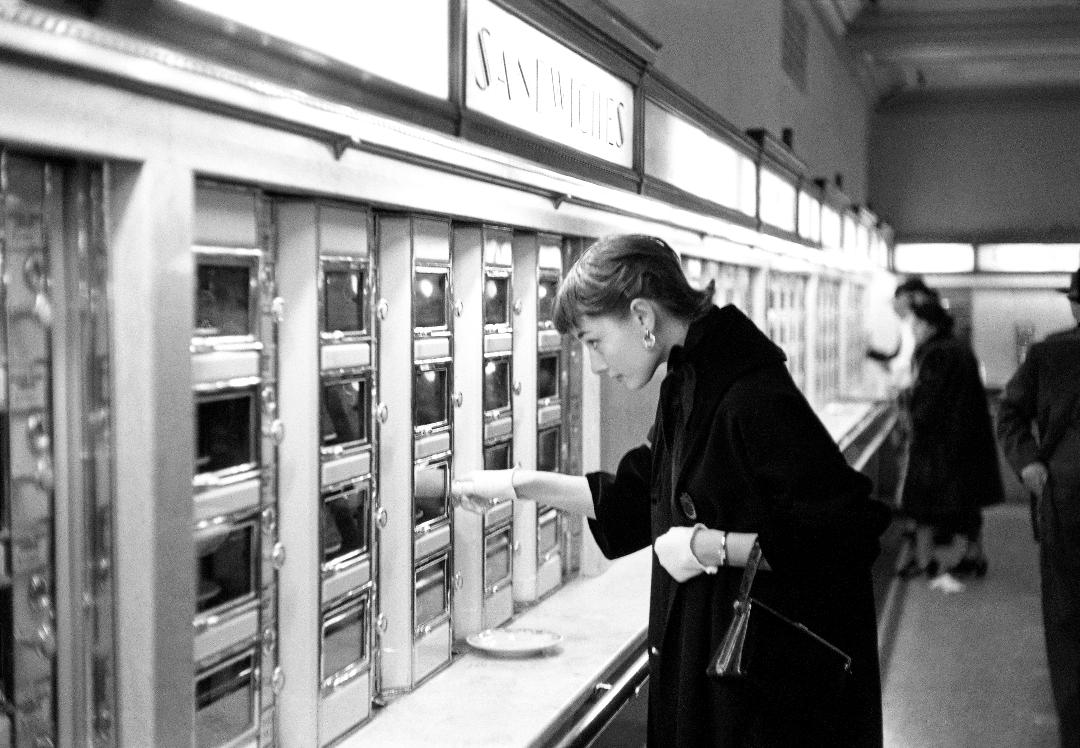 (Pictured above: The Automat appealed to everyone, including stars like Audrey Hepburn).

Affordable, futuristic, fascinating, convenient… these are just some of the adjectives that describe a culinary idea that was brought from Europe to Philadelphia in 1902. It’s name was The Automat and its concept was a gastronomical revolution. It was more than just a restaurant owned by Joseph Horn and Frank Hardart. The concept was that people could go inside and up to these glass doors framed with brass to see what tasty treat was behind the glass, insert a nickel and be able to reach in and take the item out. This vending machine of sorts supplied everything from roast beef sandwiches to apple pie prepared by unseen cooks in the back. People could even push down an Italian-inspired dolphin-headed spout and get their own coffee with a perfectly measured splash of cream for five cents.

This idea started long before the concept of fast food we have today. It was more than just delivering a hot meal in a unique way. The price was right for everyone. The staff really cared. And everyone was welcome; no one was turned away – creating an atmosphere that included everyone from the homeless to the high class, all races and creeds, the everyman and the socialite. Even well-known stars came for a meal there. This was a haven from the ordinary and that made the Automat really special. The restaurant started in Philadelphia and went on to New York City. It would become the largest restaurant chain in America.

This phenomenon has become the subject of a documentary called “The Automat” by director Lisa Hurwitz. She asks and answers the all-important question – what happened to The Automat? Within the film, she has many sources giving their own version of the history of the restaurant chain, including what led to their success and their ultimate closure. Included among these experts are people who worked at Horn & Hardart and their descendants, as well as historians and lovers of the Automat. Actor Elliot Gould is one such fan, as well as actors/ filmmakers Carl Reiner and Mel Brooks. They share their favorite memories of the locale, from their favorite food to interactions with the staff. Brooks, especially, shares a bit about his childhood, including photos. The late Supreme Court Justice Ruth Bader Ginsburg and Secretary of State Colin Powell also chimed in. Starbucks CEO Howard Schultz even talked about how the concept inspired him to create Starbucks.

The timing of the growth of the Automat could not have been better. People had moved into the city as the industrial revolution got underway and needed a quick place to eat lunch. As the Automat began to grow, so did the number of women in the workforce. The number of stenographers grew from 5,000 to 300,000 from the 1880s to the 1920s, they noted, so women also became a key demographic for the new concept, providing a quick and affordable lunch in a safe environment. Those same factors were reasons they saw for the eventual demise of the Automat. As World War II ended, women got out of the workforce and became stay-at-home moms and people moved out of the city and into the new suburbs, taking away much of the target audience needed for these restaurants to stay busy. With less volume, it became harder to maintain the same pricing. A nickel only goes so far. These were just a few reasons for the change, along with the eventual introduction of fast food restaurants. Finally, the spotless Art Deco Automats were torn down and places like those fast food faves replaced them.

But to those who remember the Automat, good memories remain. And this charming film stirs up all that nostalgia. For those who never knew about these gems, it is quite a lesson in a forgotten piece of history. This cultural icon of bygone days was really a bellwether as to how culture was shaping around them.

“The Automat” is opening in South Florida theaters starting on Friday, April 29 (in Miami at AMC Aventura and in Palm Beach County at Movies of Delray, Movies of Lake Worth. Additional theaters TBA).

For more information about The Automat, visit www.automatmovie.com