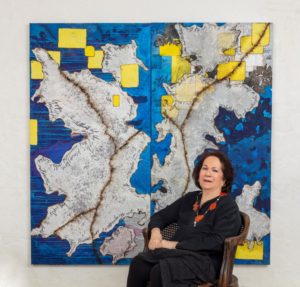 As fragile as ice, ready to burn, touched by the elements, tethered together … the forms and lines intrinsic in artist Mira Lehr’s most recent collection is both deeply rooted in the natural world and inspired by transcendence. Entitled “Planetary Visions from Spaceship Earth,” her new exhibition now on display at Rosenbaum Contemporary, a fine art gallery in Boca Raton, until Jan. 16 captures a sense of urgency, of Earth’s vulnerability and symbiosis. Her considerable pieces take over the once blank walls filling them with a wash of color and shapes, as well as lines burned into the canvas and paper scorched at the edges.

Her “What this Earth Does Not Remember I and II” shows off a map, perhaps reminiscent of the Dymaxion map created by architect and futurist Buckminster Fuller, who she once worked with (more on that later). In the piece, the map shows burnt lines spiraling throughout topped with words, a poem talking about nature. To create the lines, fuses are affixed and lit. Also used is Japanese burnt paper, which is layered on the canvas. Both media are utilized in a lot of her pieces. The ever-present theme seems to bring about the idea of the world being on fire, so slowly burning, we don’t know we are being consumed… and, from afar, the interconnectedness of us all is obvious, as well as our ephemeral nature; the ticking time bomb keeps ticking and the need for change is all the more urgent. Her “Mystic Silence That Cannot Engage” uses deep reds and oranges, the quality looks a bit like a forest fire. Other pieces of hers have a cooler color palette reminiscent of the arctic, perhaps a reminder of the polar ice caps melting slowly…

This reporter had a chance to talk with Lehr about her process and the unique media she employs. The concept of using gunpowder, she said, was inspired by an artist she saw at the Guggenheim using it once. It was her studio assistant who brought the idea of fuses to her attention. She works on canvas or a piece of board, in addition to making mobiles and other three-dimensional pieces. She says she utilizes Japanese paper ‘because it is strong but transparent. It doesn’t break apart. It is strong as steel but beautiful and fragile as paper.” She cuts some of the paper into pre-cut shapes in different colors and keeps them like a “vocabulary of collage shapes,” so when she needs them, she can reach in and pull them out to add to any new work. Then, she uses a torch or cigarette lighter to burn them. She also uses acrylic and other media in her works. She adds words using ink or charcoal.

“I create every day,” she said. “My whole house is a studio. When I am not in the studio, I am conceptualizing, getting ideas. I draw ideas. When I make [the art], ideas are spinning in my head. I never pre-draw [the actual work]. Sometimes, what I end up with is different from what I started with. It is intuitive. It is a growing entity that makes you listen and watch, and be a partner with it.”

She said some pieces she can get finished within a week. With others, she struggles, ends up exhausted, puts them away and takes them out later and, in a flash, the answer will come to her and she will know what to do with it. Sometimes, the answer never comes and is never resolved.

A lot of her pieces in the new exhibition were done during the pandemic. Because it is a global crisis, her pieces are more about what is happening than where. She found that her pieces now are less analytical and more intuitive, and spiritual, as if inspired from another place.

After seeing her pieces, Lehr says she hopes that people will “walk away with a feeling of peacefulness, calm, poetry, seeing something in a new way … reaching their soul.” She adds, “My obvious wish is that they love the environment and care about it and hope to make it right again.”

She said she wants people to know, “I work sincerely. I am never influenced by what is hot. I work from spirit and what is honest.”

More about the artist

Mira Lehr was born in New York, moved to Chicago and then moved to Miami at age 10, only to return to New York to go to boarding school and later attend Vassar college in Poughkeepsie, NY. She comes from a family with an artistic bent. Her father was a musician and her mother’s brother and cousin were fine artists.

“I always drew,” she said, “portraits of my friends… They would buy them for $1.”

Lehr added, “My parents didn’t encourage me. No art lessons. I did it on my own. I went to college. They did not have major in studio arts then. Studio art was not scholarly enough. I studied art history.” She pointed out that Linda Nochlin was one of her teachers, a feminist art historian who has had books written about her.

She continued, “When I got married, New York was the center of art abstract Expressionist movement. I was right there. I had to move back [to Florida] because of family matters. She was apprehensive about the move. From what she could see, there was no art scene down here. She explained, “Women artists were not recognized. They were thought of as dilettantes in the art world. Nobody paid attention.” She decided to work to change that and set up a co-op that would last 30 years and bring in women artists, classes, etc. This year marks the 60th anniversary of its founding.

Many ask her about her work with futurist, theorist, architect and more, Buckminster Fuller. When he did his “World Game” in 1960s, she applied to participate and was one of two artists who were among those who joined him in working on solutions to the world’s problems. She said, “I saw the ad in the Saturday Review. I had always admired him. He took me and I think 25 others. He did not want specialists. He wanted artists, philosophers, scientists… no one vested in one thing. We worked together one summer surrounded by his [Dymaxion] world map, his inventions and geometry. He inundated us with his talk and brilliance. It changed me. I came out having so much more respect for human beings and what they are capable of. I realized that with more effort, we could do more with less… and not relying on politics to make it happen.” She added, “It is a profound feeling. Man is meant to be a success on the planet.”

What solution did they find? “One of the big no-nos is the use of fossil fuels, polluting the air. It is going to be our downfall,” she said. “We searched for other sources of energy–tidal, solar, laser, etc.”She finds it interesting how now people are starting to utilize alternatives for energy now.

“I anticipate if we get through the pandemic and local things that are happening, we will be much more efficient on the planet. There is an enormous amount of waste that goes on. I don’t think we will be back to where we could have been. But I do think we can stop [climate change] from progressing,” said Lehr.

When not creating, the artist spends time in her home in Miami Beach. She enjoys reading and is a science-buff. She is a widow and has four children, and seven grandchildren. “When I was 18, and during my marriage years, I spent time with my husband and children. I managed to have it all,” she said. Now, that her children are gone out of the house, Lehr said she can focus on herself again. “I feel like I am 18 again.” She also mentioned she has a new book coming out called “Arc of Nature, 2nd edition.”

Her new exhibition is at Rosenbaum Contemporary art gallery, located at 150 Yamato Road in Boca Raton until Jan. 16. Her collection is only one of the many pieces on display, which are constantly changing. They are open Tuesdays through Saturdays, 10 a.m. to 5 p.m. You can also tour the exhibition virtually by going to their website at www.rosenbaumcontemporary.com.

In the same building is RFA Decor, which has plenty of pieces to choose from for interior decorators and those seeking originals, prints and more. Many pieces can even be modified as needed to best fit a space (such as changing a color…or even adding something else to the painting). In addition, they sell mirrors and do framing. Find out more at www.rfadecor.com