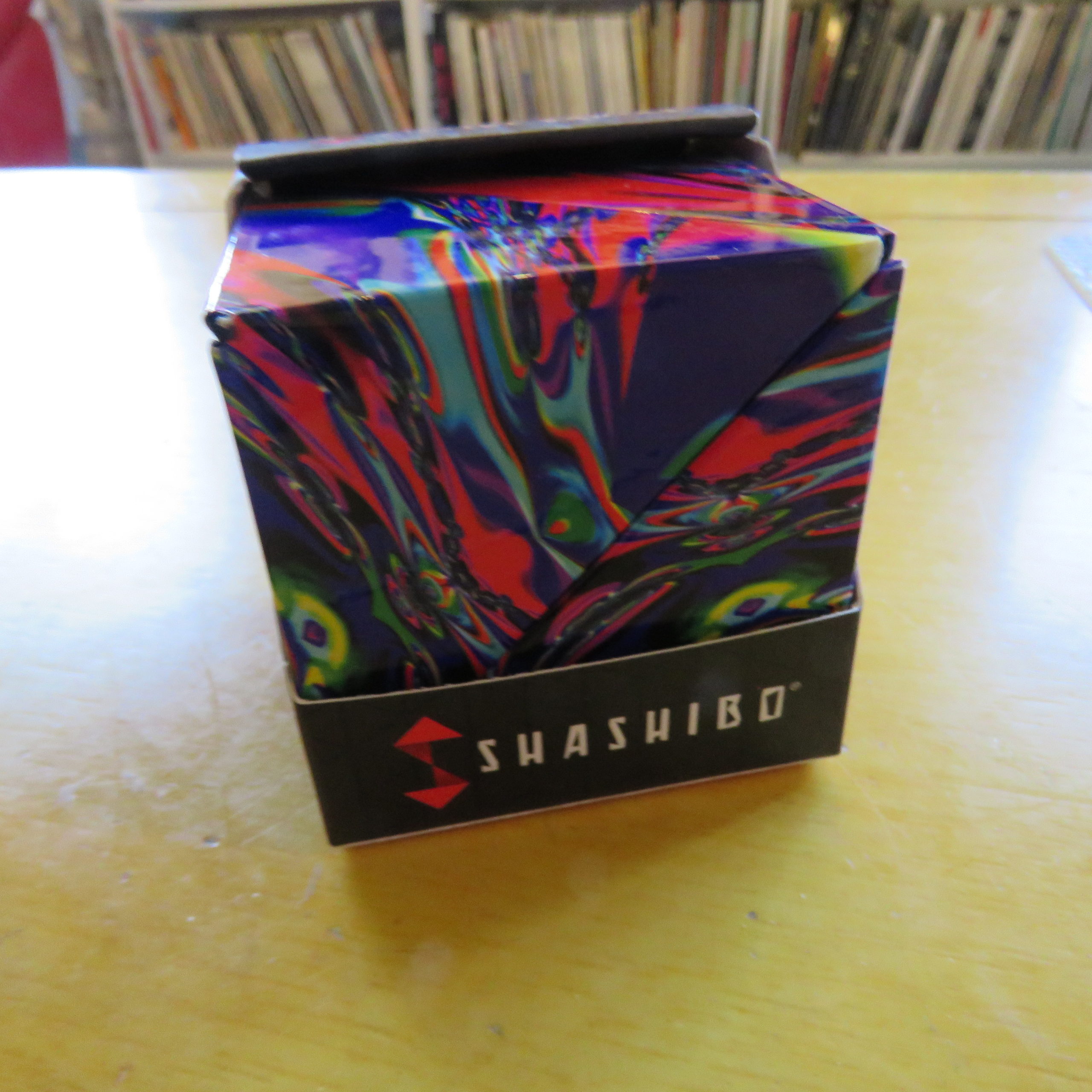 A cosmic creation, psychedelic designs, painterly patterns…. every shift of a SHASHIBO Art Cube makes a new artistic shape. Similar to a Rubik’s cube and yet completely different, the cube creates 70 different shapes. The cube utilizes magnets to make each shape snap in place and hold its position. Highly addictive, manipulating this puzzle is akin to using a fidget spinner—your hands can’t seem to stop making new formations.

This dynamic new toy was created by none other than “the father of digital art,” otherwise known as artist Laurence Gartel. He may be a Ft. Lauderdale resident, but this world traveler doesn’t let grass grow under his feet. The pandemic did not stop his muse.

Last September, the process began to make this new invention. He was commissioned by Fun in Motion Toys and, with the help of a German mathematician, he made it come into being and be distributed all over the country. As of this article, he has already sold half a million of them.

It was synchronicity and fate it seems when you hear the story of how it all began. He was driving from Boston to the airport and having a discussion about his mother and some of her New Age friends, and talking about her belief in the healing properties of magnets when he received a call from a former student he had not heard from in a long time from the days of when he used to teach at the Palm Beach Photographic Center. She said she had a project for him… get this… it involved magnets. But the synchronicity did not stop there. When he went to meet with the mathematician and others from the toy company, on top of the Empire State Building, every one was introducing themselve,s and when it came to his turn, his response was a little different. He said, “I am Laurence Gartel and I see 11:11 everywhere.” Now, that was certain to stir up a conversation. But, the magic of the moment came when the mathematician asked him to take a selfie soon after; the time on the phone? 11:11.

He said he had told a friend of his about always seeing the number combination (something that a lot of people say happens to them) and the friend recommended a book on the topic. From there, he learned that the number basically means God. So to him, seeing it reveals a Constant Consciousness, a connection with something beyond. So the project seemed divinely inspired.

Today, he is busily promoting his SHASHIBO art cubes as they sell like hotcakes. The individual cubes are available on the Fun in Motion website (www.funinmotiontoys.com) and also at Barnes & Noble, and Amazon.com. But it is his Limited Edition that really is a collector’s item. It includes four cubes in the beautiful keep-able box, as well as a certificate of authenticity, and some more information on the artist himself. He is only selling 2021 of them. The Limited Edition sells for $299. The Limited Edition Collector’s art box is only available on his website –www.gartelshashibo.com.

Of the cubes, he said, “It is art you can touch. You go to a museum, you can’t touch the art. This is the reverse of the art world. We want you to touch and feel the experience.”

Gartel knows a lot about the art world. He has been an integral part of it since the 1980s. He gets remembered for teaching Andy Warhol how to use the Amiga computer. He garnered the most attention, however, when he created the first digital art cover for Forbes Magazine in 1989. You can also see Gartel in the one of the “Think Different” ads, a campaign he was involved in with Apple and his work on the popular ABSOLUT GARTEL for the Absolut Vodka campaign. He has worked with the likes of Britney Spears and Justin Timberlake. He has designed many items from cigar boxes to his popular car wraps. His work has been shown all over the world in huge exhibitions, and he has been asked to speak at countless conferences and events. His unique style was even the official artwork for the 57th Annual Grammy Awards.

Like his art cube, Gartel is always in motion and no matter which direction life takes him or in what form it manifests, he is always creating. He has spent much time during the pandemic not only creating some new pieces of digital art, but also working on three 50-page encyclopedias that encompass his life’s work, for a total of 500 pages of artistic creations and stories.

Find out more about Gartel and his newest creation at  www.gartelshashibo.com