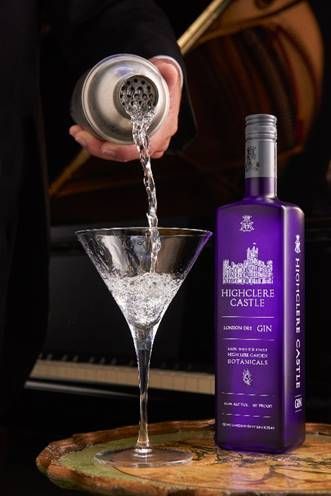 The majesty of purple, the sophisticated design– the tall and stately bottle alone signifies an air of nobility and class. But it is the smooth flavor inside a bottle of Highclere Castle Gin that signifies an unparalleled refinement. This award-winning super-premium gin is created from botanicals found on the ancient estate known world-wide from its appearance in the TV show and movie “Downton Abbey.” The gin is also crafted in England’s oldest gin distillery using one of the oldest working copper gin stills. The brand was born from a partnership between the 8th Earl & Countess of Carnarvon with American entrepreneur and co-founder of Onyx Spirits Company Adam von Gootkin.

The gin utilizes botanicals grown on the estate, including juniper, lime flower, orange peel and a touch of lavender. The herb garden from which these botanicals come was planted originally back in the 9th century by the Bishops of Winchester. The Carnarvon family has lived in the estate since 1679 when gin first came to England.

Highclere Castle Gin was first launched back in 2019 with the mission to be the finest gin in the world and it has lived up to its lofty goals bringing in award after award.

Asked how the brand came about, Von Gootkin said, “About five years ago, I was hyper committed to a brand that was genuine, so real and so noble in its mission, and grand in its pedigree.” It was about that time that he was introduced to the TV show “Downton Abbey,” which his wife watched, and a PBS special telling more about where it took place. “I learned about the castle and working estate,” he said, and he thought it would make a perfect home for what would become Highclere Castle Gin. He had emailed the Earl and Countess right away with the concept and he received a call back, and, two weeks later, was on a plane with his wife to work on building the brand.

Von Gootkin has a long history in the spirits business. His family had been in the industry since the 1800s and his grandfather had run a speakeasy on the Connecticut River during Prohibition, prompting him to co-create his own speakeasy tasting room too and the first whiskey in New England. His moonshine was the official spirit of the 2012 Grammys. With the success of that brand under his belt, as well as a book – “Living Proof: Onyx Moonshine’s Journey to Revive the American Spirit,” which discussed his unique approach to traditional business principles – Gootkin was ready for more. Now, he could use his knowledge in a new way.

He said he has found that most liquor brands are created in the board room by marketing professionals, devoid of history, purpose or authenticity. He was ready to change that. He built a small but effective management team to take on this new brand. He said when building his team, he looked for “passion, common sense, and people who share the commitment to be the best we can be.”

On one of his trips, he started exploring another brand as well, Highclere Castle Cigars, which were created in 2017. He noticed the long-lived tradition in high class households of the gentlemen leaving the dining room to retire for a cigar, a tradition now that also includes ladies. Cigars seemed like a perfect accompaniment to the gin. He worked with a good friend, a world-reknowned cigar blender, Nicholas Melillo, of Foundation Cigar Company. He said, “I knew he had access to special tobaccos. I asked ‘Would you be willing to create what they had in the 1920s?’” When Nicolas agreed, they all pitched in together, along with the castle archivist to look over invoices from what was bought in the past and spent hundreds of hours and trips throughout the jungles of Central and South America to try different types of tobacco until they found just the right blend. He did the same when creating the gin, looking over old records and researching to find just the right formula.

He likes the idea of being involved in every aspect of business with his brands. “It is a unique world. One day, you are a farmer, the next day you are wearing a tuxedo launching a brand.”

His advice for people starting a business? “Hire the very best people you can find. Keep your team close. Your team is an extension of your vision. You need people that really get the business. They are hard to find. We all have great ideas. Execution is hard. You have to be obsessive about following through. Have goals. Without them, you can’t do anything.”

When he is not working, he might be relaxing with a drink made with Highclere Castle Gin, of course. He feels the gin is great enough to stand alone, not needing to be mixed with something else; but, of course, there are plenty of ways to enjoy it. Add an orange peel or wedge to bring out the orange notes. Make a gin and tonic, a Negroni, a Martini, or one of his faves, a “British 75,” made with simple syrup, champagne, fresh lemon juice and lemon garnish.

Although Von Gootkin loves his business life, he also knows the importance of family. He has two little ones at home, age 1 and 3.

“Before COVID hit, I was on the road more than home. I like being with customers. Starting any business takes heart and soul” he said, but you have to spend time with your family too, and have an effective team behind you.

He also stays balanced by not only spending time with family and friends, but also running, doing meditation and practicing Yoga. “You can’t take any business too seriously. Have fun along the journey. Keep healthy and work hard,” he said.

He originally launched the brand here in Florida on Amelia Island. They were invited to be the primary gin at the Concourse D’ Elegance there before COVID-19 hit. Then, everything shut down. So, now they are relaunching in the state, looking at places like Naples, Ft. Myers, Vero Beach and also will be coming into Palm Beach, and elsewhere.

He said you can find Highclere Castle London Dry Gin at ABC Liquor stores (or on their website) but also suggested that people should ask for the brand when they are at restaurants so that they will start ordering it there as well.

Due to COVID, they have also had a few virtual cocktail parties to introduce the brand and the history of Highclere Castle and the family who lives there. They have proved quite popular. They have included the butler showing off some gin recipes, and there are also plenty of funny stories and anecdotes with Lord and Lady Carnarvon while giving a tour of the estate. The next one is Dec. 18, 4 p.m. EST on their Facebook Live. Find out more about Highclere Castle Gin by visiting www.highclerecastlegin.com.